Podcasting Success With 1000 (Or Fewer) Downloads Per Episode

In 2011, during a routine physical, Lee Silverstein’s doctor told him, "You’re 50, go get a colonoscopy."

He did. The results came back positive.

The cancer was caught early enough that the recommended treatment was surgery. Chemo wouldn’t be necessary.

The surgery was a success and Lee moved on with his life, but continued to monitor his situation. He got married. And just 17 days afterward, he found the cancer had spread to his liver.

Once again, Lee was recommended surgery, this time with six months of chemo.

He successfully completed both. Then his life really changed.

While working at a career college, Lee got a call from a friend who needed meeting space and wanted to use an empty classroom. Being a good host, and being curious about the meeting, he sat in on it.

"It was like a lighting bolt hit me," he says. "I had to start a podcast. I needed to help people who had heard the three words that I’d heard, 'You’ve got cancer,' to give them hope and let them know that this isn’t an immediate death sentence."

Today We Have Cancer has dozens of episodes, interviewing cancer survivors (caregivers/med professionals), educating people about colon cancer, and sharing stories of hope.

Lee isn’t doing "big numbers" with his podcast. In fact, he’s never had a single episode get more than 1000 downloads.

Yet he has three paying sponsors. To them, the number of downloads Lee gets is an afterthought to reaching some people in a very targeted market.

What he talks about isn’t always pretty. Colon cancer isn’t exactly the kind of thing most podcast listeners are interested in.

"While I lay there after my first infusion of this very strong medicine, sad, depressed, scared, I began searching for … hope online, and I came across something I had never tried before, a podcast called We Have Cancer. So I listened to my first podcast ever, and hope really was activated inside. Stories of Hope and Survival!  Exactly what I needed to hear. Around this time I was also learning about the benefits of exercise, how it can possibly slow recurrence. I felt I needed to get up and move all of a sudden, maybe this was my ticket!! My second infusion of (chemo) came, and when the pump came off 46 hours later, I loaded up some episodes of We Have Cancer and began my new favorite hobby...walking. I walked. Slow, very slow. And I sent a message on Facebook to the guy running it to say thanks. His name is Lee, and he helped to save my life, and I'll always love him for that. Lee, I love you man, you helped save me, and I will never forget. I hope to do like you, and inspire others to help keep them alive, and in turn they will do the same. Thank you for all you've done."

This is what success looks like. It’s also getting 1,000,000 downloads, making six-figures per year, and being famous.

Success with your podcast is whatever you want it be. And it’s attainable.

So figure out what your version of podcast success is and work your way backwards to make it happen. 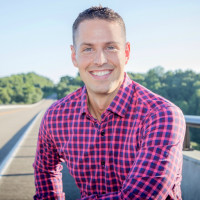 David Hooper
Podcast Promotion Podcast Advertising Q&A 4 min read
Q&A: How can I get guests to share my podcast?

David Hooper
YOU DON'T NEED ANOTHER NEWSLETTER! But since you're here, how about one to help you grow your podcast audience?
Sign up for our newsletter
Share: